The Centers for Disease Control and Prevention is warning of measles in 21 states.

Health officials in South Carolina have also confirmed its first measles case in 21 years. It was confirmed Friday, The Associated Press reported.

The number of people sickened was counted by the CDC through July 14. The case count is preliminary and is updated monthly, the CDC warns.

The majority of those who contract measles are unvaccinated, according to the CDC.

In 2017, there were approximately 118 people who developed measles, and the highest number of patients was in 2014 with 667 cases.

Signs and symptoms of measles include:

The fever and rash should fade after a few days, according to the CDC.

Measles are spread through coughing and sneezing. It can live for up to two hours after a person has coughed or sneezed.

Measles, according to the CDC, is so contagious that 90 percent of people who have come in contact with an infected person can become sick if not immune to the illness.

It can be spread for up to four days before the rash appears and four days after it is visible, the CDC reports.

The CDC recommends that children be vaccinated with the measles-mumps-rubella (MMR) vaccine. Two doses are needed for full coverage -- one at between 12 and 15 months old, and a second round between 4 and 6 years old. 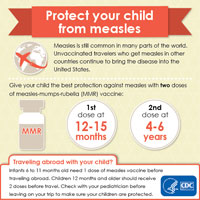