If you are with Verizon Wireless, Verizon is about to make a major change in how they sell you service. Starting Aug. 13, there will be no more contracts.

Longtime listeners know I despise contracts. I've long called them "handcuffs." So I'm glad to see step by step that one company after another is going to the world standard model where you buy a phone however you want, wherever you want...and then you buy service. The thing with 2 year contracts is an anomaly that's very local to the United States. And the sun is about to set on contracts now that Verizon exits the contract business.

That's the good news. But the bad news is that Verizon is now clearly going to be phenomenally expensive. It used to be just fuzzy before, but now there's no question about it. A family of four will pay triple with Verizon what they will with T-Mobile.

Verizon has historically made its mark in three ways. First, their network has served every nook and cranny of the country. Second, they've had a large corporate customer base that just doesn't care about price. And third, they've developed a base among very wealthy families or individuals who don't really care what anything costs. So people have either wound up with them because they don't care about price or they need deep rural coverage.

Verizon's new plan will punish anybody who is a data hog. The plans are so expensive that they're going to be scary. You would think it's Halloween when you go to open your bill!

So I just want you to know, if you've historically been with Verizon, there will be big costs that comes with doing continued business with them. The next time you go to buy a new phone is the best time to shop the market and see what other providers could save you more money.

While Verizon just got more expensive, T-Mobile is offering a family plan with four lines for only $30 per month, per line. Plus, EACH line gets 10GB of data, on top of unlimited talk and text. That's a great deal.

Check out what the same plan costs across the big four cell phone carriers. 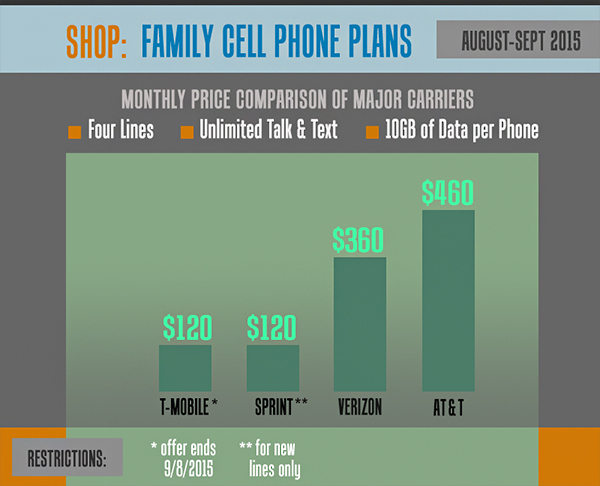 If you need the Verizon network backbone, check out a company called Total Wireless that offers slower access to data on the Verizon footprint at a fraction of the cost.

Another option would be Straight Talk that offers a number of phones for the Verizon network at $45 a month with unlimited talk, text and 5 GB of data a month per line. That's far cheaper than buying service directly from Verizon.

ClarkHoward.com  is America’s #1 resource for all things money.

Learn how to keep more  of what you make at

Money in your pocket. Advice you can trust.

Clark Howard
© 2022 The Atlanta Journal-Constitution.
All Rights Reserved.
By using this website, you accept the terms of our
Visitor Agreement and Privacy Policy, and understand your options regarding Ad Choices.
Learn about Careers at Cox Enterprises.
Back to Top