ATHENS — A late-night visit to a strip club preceded a car crash that killed a University of Georgia football player and an employee of the school’s football program, raising questions about boundaries between the program’s staff and its athletes.

Surveillance video obtained by The Atlanta Journal-Constitution shows Georgia offensive linemen Warren McClendon and Devin Willock, along with other players, leaving Toppers International Showbar in downtown Athens about 2:30 a.m. Jan. 15. They were accompanied by two women who strongly resemble the UGA employees involved in the fatal crash barely 15 minutes later.

The video provides a final glimpse of the group before their speeding SUV left the roadway and slammed into two utility poles, two trees and an apartment building. The crash, about 2.5 miles from the strip club, killed Willock, 20, and UGA recruiting analyst Chandler LeCroy, 24. Another recruiting staff member, Tory Bowles, 26, suffered serious injuries. McClendon, 21, was treated at an Athens hospital and released.

The Journal-Constitution obtained the video from the Athens-Clarke County Police Department through an open-records request. The department collects high-definition images from cameras mounted throughout the downtown nightlife district. The Journal-Constitution reviewed footage captured between 1:45 a.m. and 2:45 a.m. by four cameras near Toppers.

Reporters identified the figures in the footage from photographs and public social media posts. In one picture taken hours before the crash, McClendon and Willock wore the same clothes and hats they had on as they left the club.

The video, social media posts and interviews provide the most complete understanding to date of events that culminated with the single-car crash. It occurred at the end of a day when tens of thousands of fans poured into Athens for a celebration of Georgia’s second consecutive national college football championship.

Many questions remain unanswered, however. Foremost among them: Why were two university employees out with two student-athletes at such a late hour, riding in a rented vehicle like those the football program uses to transport potential recruits?

It is not clear whether Bowles and LeCroy had been assigned to accompany McClendon, Willock or other players the evening of the crash. Their work duties as recruiting analysts — listed in a job description that UGA posted in 2021 for a similar position — included giving tours to football prospects and driving them around the campus and the city. The job posting did not mention accompanying current players on any occasions.

If Bowles and LeCroy were not on duty, their socializing with players suggests a possible violation of university rules. In a policy manual for student-athletes, the UGA Athletic Association says coaches and staff members are responsible for avoiding “prohibited consensual relationships” with athletes. This includes behavior that might be deemed “inappropriate,” the document says. The policy does not list all possible examples of inappropriate conduct. However, employees may be fired for violations, the document says.

University officials have not responded to detailed questions about the crash from the Journal-Constitution. On Sunday, a spokesman said UGA President Jere Morehead was not available for an interview. The spokesman released the same statement that the Athletic Association issued last week:

“Our primary focus remains on providing comfort and support to the families and friends of Devin, Chandler, and the two others who were injured, as well as everyone impacted by this tragedy. Out of respect for the individuals and their families, we will not comment further at this time on the accident or the ongoing investigation.”

The celebration on Saturday, Jan. 14, began with a parade through downtown Athens. Coaches and players then marched into UGA’s Sanford Stadium, drowned in cheers from thousands of fans. McClendon and Willock entered with other players from the offensive line. Shortly after the event was over, McClendon posted a message on Twitter: he had decided to leave school early to enter the National Football League draft.

Recruiting analysts spent the day assisting prospects the coaches had invited to observe the spectacle of a football program celebrating the pinnacle of its success. These visits have become a spectacle in their own right since Kirby Smart became Georgia’s head coach in 2015. Football staff members once ferried recruits around campus in golf carts; under Smart, they started using luxury vans and large black SUVs like the Ford Expedition that LeCroy was driving at the time of the crash.

It is not known when Bowles and LeCroy met up with McClendon and Willock.

About 6 p.m., Willock posed for a photograph with a young fan at an Athens restaurant and then retweeted the picture posted by the child’s grandfather. Another social media post shows that he and McClendon gathered with other football players later in the evening. At some point, the players made their way to Toppers.

The club has operated for three decades on Jackson Street, about a block off UGA’s North Campus. Patrons must be 18 or older to enter, 21 or older to buy or drink alcohol. The establishment advertises a full-service bar.

The night of the crash, dozens of people began emerging from the club’s front door at 2 a.m., closing time. McClendon, Willock and the two women were among the last to leave, coming out about 2:30.

The group stopped on the sidewalk at a nearby intersection at 2:32 a.m. At least two other men who can be identified as Georgia football players waited with them for a walk signal before they proceeded west on East Clayton Street and out of view of the camera.

At 2:40 a.m., the Ford Expedition appeared at the same intersection, headed east. McClendon can be seen in the front passenger seat, his window down as he accepted what appeared to be a flyer from a man moving from car to car stopped at the light.

When the light changed, LeCroy drove through the intersection, heading east out of downtown. With traffic still relatively heavy at the late hour, LeCroy passed one car on the left and another on the right in the next block. Then the vehicle turned right, disappearing from the camera’s view.

At 2:48 a.m., about 18 minutes after the group left Toppers, a police dispatcher sent an officer to check on an accident reported at the intersection of Barnett Shoals and Stroud roads. An investigation found that LeCroy was driving faster than the 40-mph speed limit and that she “failed to negotiate” a curve, a police accident report said. The Expedition’s front passenger-side tire hit a curb, forcing the vehicle off the roadway.

On the shoulder, the vehicle struck two utility poles, cutting each in two, the report said. The right rear of the vehicle, where Bowles was seated, hit a tree, causing it to rotate clockwise before striking another tree on the driver’s side. The vehicle then rotated counter-clockwise before hitting an apartment building. In photographs taken after the crash, the vehicle is so crumpled it is barely recognizable.

Willock, who was ejected from the seat behind the driver, died at the scene. LeCroy died at an Athens hospital. McClendon, who was sitting in the front passenger seat, as he had been when the vehicle left downtown Athens, received the least severe injuries.

HOW THE ATHENS CRASH UNFOLDED

According to the preliminary crash report, the Ford Expedition driven by Chandler Louise LeCroy was driving southbound on Barnett Shoals Road in the early hours of Sunday when it failed to curve left with the road and jumped the curb. 1

The vehicle's front passenger side then struck two utility poles 2, cutting them in half. The vehicle struck one tree 3 with its back passenger side, which sent it rotating clockwise before it hit another tree with its front driver's side.

The force of those strikes sent the vehicle rotating in counter-clockwise rotation before it struck a parked vehicle and the front door of a corner apartment unit. 4 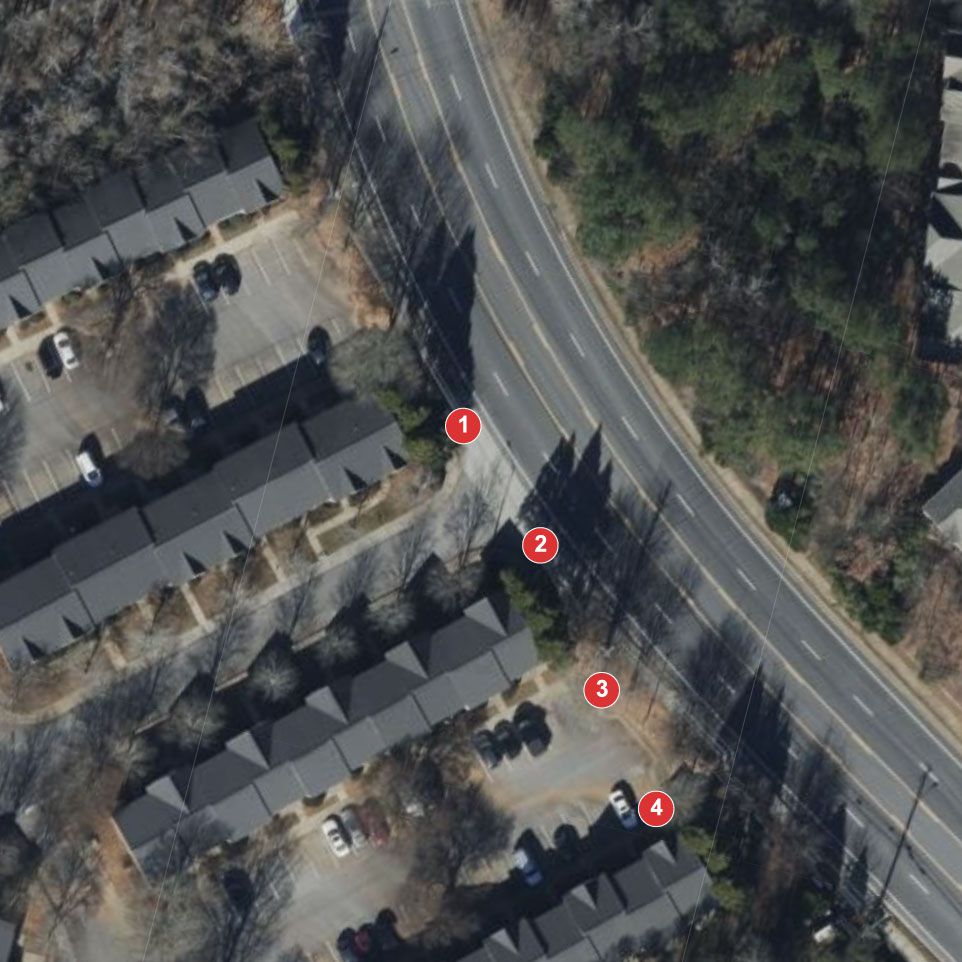 This graphic has been updated. An earlier version incorrectly charted the vehicle’s path and resting place.

NOTE: Locations are approximate. Police diagram is not to scale.

A toxicology test was performed on LeCroy, but officials don’t expect the results for several weeks. The passengers were not tested for alcohol, Athens-Clarke County Coroner Sonny Wilson said.

Over the past week, the accident site has become a memorial of sorts to the victims. Well-wishers left flowers. One planted a small UGA flag. And another erected a wooden cross, painted in the same shade of red as the football team’s colors.

A week after the crash, several football players returned to another site: Toppers, the downtown strip club. Reporters observed them early Sunday in the club’s VIP section, elevated on a platform just behind the dancers’ stage. A bottle of liquor sat in a bucket on a table.

Why are we writing this story?

Managing Editor Leroy Chapman Jr. answers the question “Why are we writing this story” about the Jan. 22, 2023, publication of “Strip club visit raises questions about fatal UGA crash.”

WE ARE PURSUING THE FACTS. Here is what we know so far. On Sunday, Jan. 15, our state woke to tragic news: Four young people — two University of Georgia athletic department employees and two football players — were in a deadly, single-vehicle accident. Two died and two were injured.

We soon learned that the rented SUV carrying the four was driven that morning by 24-year-old university employee Chandler LeCroy, who died from her injuries. Devin Willock, a 20-year-old sophomore offensive lineman, was a passenger who died at the scene.

WE ARE ASKING ACCOUNTABILITY QUESTIONS. LeCroy was driving a rental car. The university rents such vehicles to drive recruits on campus visits. Police say speed contributed to the accident. Why the four occupants of the SUV wound up together that night is important to understand. Those facts will determine who is ultimately accountable and what role the university’s decisions and policies might have played. The university is responsible for ensuring the safety and well-being of student athletes.

HOW WE GOT THIS STORY. In seeking to shed light on what happened prior to the accident, The Atlanta Journal-Constitution interviewed people who encountered some of the four involved in the accident that night. The AJC also obtained public records and street camera surveillance video and found social media posts that allow us to construct a timeline.

THE AJC WILL STICK WITH THE STORY. We are steadfastly committed to providing clarity. We will continue seeking information from UGA administrators and athletic department leaders. We are also following the law enforcement investigation.

Editors' Picks
‘Grassroots rising.’ Behind an upset defeat in north Georgia3h ago

Scholarships open for descendants of Forsyth County racial cleansing
4h ago
Fulton Commission receives new jail study
18h ago
Rivian announces 2nd round of layoffs within 7 months
19h ago
Featured
Here’s how to watch the green comet tonight
2h ago
Misunderstood coyotes did not evolve to eat your pets, expert says
WSB’s Scott Slade stepping down as morning host after 32 years
© 2023 The Atlanta Journal-Constitution.
All Rights Reserved.