A woman who was unconscious on the table as her surgeon sang and danced over her said she never gave the doctor permission to post the video that’s now been seen by millions of people.

In the videos, Boutte danced over unconscious patients and even cut into some as the music played.

Latoyah Archine was one of those patients. She told Channel 2’s Jim Strickland she never signed a form authorizing Boutte to post pictures or videos of Archine’s procedure on social media. A picture of the form showed the signature line blank.

In text message, Boutte admitted that Archine is on the table in a video that showed Boutte made an incision and mug for the camera while the rap song “Cut It” played. The text read, “Cut it is your song girlfriend. You did awesome.” 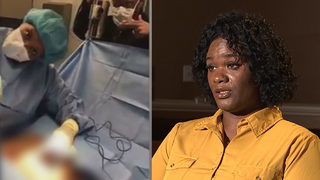 But awesome isn’t the word Archine would use to describe her surgery.

“To see that video, with my flesh being cut, without a straight line, and dancing while cutting me? That’s horrible,” she said. “I feel disrespected on a lot of levels.”

We found a second video featuring the song, in which a surgical assistant dances while holding a large excised piece of human flesh. Archine hadn't seen the video until the day of our interview.

“You think that's your flesh?” Strickland asked. “I think it is, with the ‘Cut It,’ with the remainder of the song,” she said.

2 Investigates found three separate videos with pieces of human flesh on display, including one that features twinkling lights and a Christmas song playing.

Archine is now represented by attorney Susan Witt, who estimates 100 former patients have now come forward with complaints against Boutte.

[RELATED: Patient says she woke up from surgery in hotel room with sandwich in hand]

“The dignity of the patient was absolutely compromised in that video,” Witt said.

Archine plans legal action, not just about the video, but about her results.

She said the surgery she received during that video left her disfigured.

“My right side is larger than my left,” she told Strickland.

In a full-cover undergarment, it's clear her right buttock is far larger than her left buttock. A dimple marks the start of one incision. A scar is visible across her back, but on one side it rises above her waist line and cannot be hidden by a swim suit bottom.

“Every day, I think about it, because I have to take a bath and put on clothes. It never goes away,” she said.

The day after we first aired the “Cut It” video, Archine called Strickland, saying she had already received a call from Boutte.

“I saw the news on Monday. Dr. Boutte called me on Tuesday and asked me to help her,” Archine said.

“You had a great outcome, right? But the public doesn't know that,” Boutte said in the recording.

Archine said Boutte asked her to produce a one-minute testimonial video, declaring that she is the “'Cut It' girl,” in support of the doctor.

“You think you want to do it?” Boutte asked.

Strickland asked Archine why she thinks Boutte asked her for a favor.

“Because she knew she messed up,” Archine said.

“She had some, you know, neurological damage but she's in physical therapy and she's doing good. But they made it seem like she's a vegetable, she's in a coma, you know?” Boutte said.

“She acted on the phone call that the lady was perfectly fine, it was a breeze, nothing was wrong with her. That bothered me,” Archine said.

Boutte recently settled a lawsuit brought by Cornileus and her son, who is now her full-time caregiver.

“My mom basically needs 24-hour care,” Ojay Liburd said. “She is mainly in the bed and in wheelchairs.”

In the recording, Boutte can be heard bragging that our investigation increased her social media profile.

“My social media followers have grown exponentially since the story broke 'cause everybody loves the dancing doctor,” Boutte said.

At first, Archine asked Strickland to blur her face, but over the weekend she agreed to allow her face to be shown, along with what she calls disfigurements.

“I prayed about it, and I felt like I needed to tell my story,” Archine told Strickland.

Strickland called Boutte's lawyer and the number from which Archine received the text, but got no response.