The Southeast is in the middle of a $1.5 billion problem: wild pigs.

Experts told Channel 2’s Severe Weather Team 2 Meteorologist Katie Walls that the animals are a growing threat in Georgia. Their destruction spans from neighborhoods to farms.

The wild pigs have done $150 million in damage in the state of Georgia, about a third of that in residential areas. Walls spoke to one Dawson County neighbor who said her gardens have been destroyed.

Cornish showed Walls what’s left of the landscaping at her home.

The wild pigs spared nothing. Though mostly vegetarian, the opportunistic invasive swine will eat grubs, even small mammals as they root and dig for food. The Cornish's freshly planted grass was destroyed, costing thousands.

“They pretty much demolished 2,500 square feet of it. I mean literally uprooted the whole area,” Cornish said. 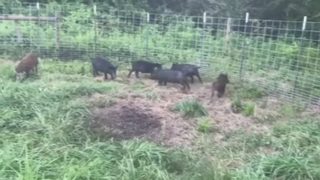 “This particular time our number is seven hogs,” Cain said.

Cain gathers such intel using this high-tech surveillance system. It records the hogs entering the pin and sends video clips to his phone. He can even close the gate remotely from an app.

The Southeast is the epicenter of the pig problem, according to Dr. Mike Mengak – UGA Wildlife Extension Specialist. He estimates hundreds of thousands of wild pigs are here in Georgia, ravaging neighborhoods and farms. We visited a damaged crop in Pickens County.

“Sixteen hogs can come in here and wipe this field out and it really hurt the farmers’ pocket book,” Mengak said.

Monitoring the sounder of 16 swine, Cain installed a 35-foot wide trap. A timed feeder goes off periodically, enticing the pigs to enter.

“When I have all 16 hogs in here, I’ll come out immediately and we’ll have to dispatch the hogs here on site. In the state of Georgia, it is against the law to transport, totally illegal to transport a wild pig,” Cain said.

That illegal transport is one reason the pig problem has spread to about 40 states.

“Then they multiply from there and then we’re the ones left with the problems,” Cornish said.